These are a few of the activities related to Korean Thanksgiving. Learn about the ancestor rites, dancing and games, and songpyeon.

A traditional Chuseok holiday starts with a hectic travel schedule to the hometown for a reunion with family. And, if they don’t gather in the hometown, then the family gathers at the home of the eldest family member. Since over 60% of the Korean population is traveling, a normal two-hour car ride can turn into a 15-hour marathon.2

In the morning, family members fulfill their obligations towards their ancestors followed by food and games later in the day.

Early morning, the family pays respects to their ancestors with traditional rites. The three duties — bulcho, sungmyo, and charye. — include pulling weeds, sweeping the graves, making offerings of food and drink, and ending by bowing in thanks.

CHARYE.    Ancestor Memorial Service. “An elaborate table setting of food offered to the ancestors at home. There are several meticulous steps to setting this up and doing it properly, like lighting candles before the alcohol is poured in exactly three different cups and bowing twice after it. Each dish also has a specific area of the table it needs to go on.”3 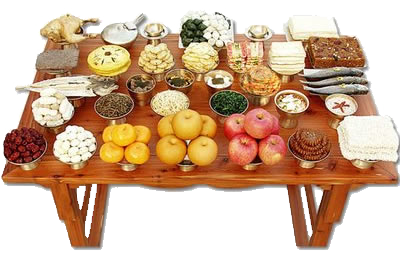 BEOLCHO.    Cleaning the family memorial site. “Weeds and such that have grown around the graves of family members all summer long must be picked and discarded...Graves with weeds still growing around them after the Chuseok holiday will make others assume that they have undutiful children, and is considered an embarrassment for the family.”3

SEONGMYO.    Visiting ancestoral graves. “Respect must be paid to the grave, often in the form of bowing before it and offering alcohol, fruits, meat, and shikhye.“

After the morning rituals and work, the family enjoys a festive meal of traditional Korean food, games, song, dance, and an exchange of gifts.4

GANGANGSULLAE.    A game specifically for women or children, where several dozens will gather under the moon and dance in a circle, linking arms.3 “The dance begins in a circle to singing by a specially appointed singer. The dancers move in a circle while holding hands and slowly form other shapes as the dance progresses. One movement involves two dancers who make a bridge with their hands while the dancers file through underneath. The circle of dancers sometimes becomes serpentine or separates into several smaller circles.”

The dance originated during the Chosun Dynasty at the time of the Imjin War (1592-1598; the Japanese plan for this war was to conquor China by way of Korea). The Korean army instructed mothers and daughters to dance and sing around campfires on mountainsides to lead the Japanese to believe that the small Korean army was larger than it actually was. 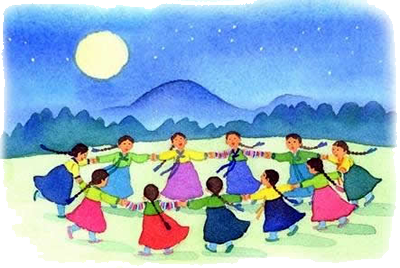 SONORI/GEOBUKNORI.    Two people will throw on a cape made of hanji (traditional Korean paper made from mulberry trees) and run around town under the guise of a cow or a turtle, going from house to house, asking for food. The food will often be shared with families who cannot afford Chuseok meals.3

GAMES.    Children and adults play a variety of games including Ssireum (traditional Korean wrestling); cow, or bull, fighting (a display of how well you fed and raised your cow all summer long); tug-of-war; archery; and, swinging (who can swing the highest).3 An especially entertaining game is Neolttwigi, standing see-saw jumping. A game traditionally for girls, the object is to catapult the other person into the air where they do flips, tricks, and acrobatic moves.

Songpyeon is a special Chuseok rice cake. It is as closely associated with Chuseok as turkey is to Thanksgiving in the U.S.

WHAT IS IT?    Songpyeon is a bite-sized, brightly colored, cresent-shaped steamed cake made from newly harvested rice and filled with something sweet. Traditional fillings include adzuki bean, black bean, mung bean, red bean, chestnut, pine nut, walnut, cinnamon, honey, jujube, powdered sesame, or simply brown sugar. Some regions fill songpyeon with non-traditional items such as acorns, pumpkin, or clams. Being steamed on a bed of pine needles, songpyeon has both the visual markings of the needles as well as the distinctive aromatic hint of pine.

LEGEND.    The history of songpyeon originates long ago during the time of the Three Kingdoms — Koguryo, Baekje, and Silla. During the reign of King Uija (641-660), the last king of Baekje, a turtle was found with odd markings on its back. The wise men of the court interpreted the markings as, “Baekje is full moon and Silla is half moon.” The bottom line: Baekje was in decline and would fall; Silla was ascendent. Silla soon defeated Baekje, and ever since this time, the half moon is considered an indicator of a bright future.

CRESCENT SHAPE.    In the preparation of songpyeon, the wrapping first has the appearance of a full moon; after the stuffing is in place and the wrapping is folded, the crescent shape is reminiscent of a half moon.

Colors.    “The five primary colors represent the desire to succeed in one’s studies an to live an exemplary life.

Phytoncides, literally “exterminated by the plant,” are airborne antimicrobial allelochemic volatile organic compounds emitted from plants that protect them from rotting and insects. Moreover, they seem to have benefits for humans also. Various studies in Japan have found that simply walking in a wooded area, or “forest bathing” (Shinrin-yoku), has several therapeutic effects.

Other studies demonstrate an increase in white blood cell count lasting up to a week and reduced stress levels following walks in forests.

Many Koreans believe that pine trees produce phytoncides ten times stronger than any other trees justifying the pine tree as the symbol for purification that expels all bad luck.