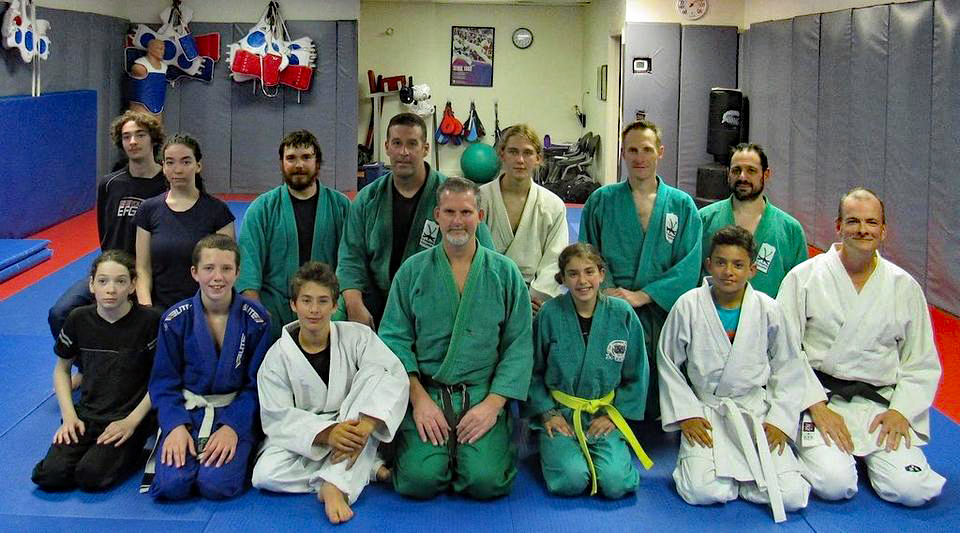 Halt founded the program in 2001 and now makes his home in Ashland, Oregon. He stated that he and MSMAP current executive director and head instructor Chuck Buhs have a long martial history and have taught together since 1989.

“Chuck is one of the highest ranking Americans in Taekwondo,” Halt said. “This town is lucky to have him.”

Buhs holds several high level martial arts degrees, including a first degree black belt in iaido (Japanese swordsmanship), a first degree in karate, a third degree in yongmudo, and a seventh degree in taekwondo. Yongmudo and taekwondo are Korean martial arts, both of which Halt and Buhs trained in under Dr. Ken Min, professor emeritus at UC Berkeley, where they first met each other.

Buhs said that, as undergrads, Peter ran the clubs’ programs while he ran the tournaments.

“Martial arts are a deeply ingrained part of our lives and are as essential as breathing to us,” said Buhs.

Last week’s MSMAP Promotion Exam was more than a test — it was a team-building event for all who participated. It was an all-ages event. Of the students who were doing the exams that night, four of them were Castle Rock Elementary students, and one of the adults was Castle Rock Elementary School faculty member, Frank Cortese, who teaches fourth and fifth grade.

When the Promotion Exam was completed, Halt demonstrated various possible real life situations in which self-defense might be warranted. These dramatic demonstrations were expertly enacted by Eli Jones and Jesse Angelini.

Halt told the students that there are always four options from which to choose when facing a potentially dangerous situation.

“The best thing is not to be there [in that bad situation] in the first place,” he said. First, “Running is always the better option...Yelling, sing your voice is the next option. And, fighting is always a last resort.”

Halt concluded, “Fighting is for people who are too dumb to talk their way out of a fight.”

Passionate about bringing martial arts to the Mount Shasta community, Buhs elaborated on the long-range benefits of martial arts training for students. He explained that students are learning physical, mental, and emotional skills.

“That training helps them make good decisions and take right actions,” he said. “It’s about learning how to interact with each other, learning how to use our voices...It’s not about raw strength; it’s about applied strength.”

Yongmudo, Buhs said, is about having a flexibility of response.

So, it could be said that Buhs applied yongmudo principles when he exercised a flexibility of response when he set up the non-profit Mount Shasta Martial Arts Program with an all-volunteer staff.

That program, which is now 18-years-old, was incorporated as a nonprofit organization in 2009.

“We’re providing a service of a quality martial arts system in a modern facility with an intelligent, progressive curriculum,” Buhs said.

Demonstrating a “flexibility in response” to making a living, when not busy teaching matial arts or running MSMAP, Buhs works as a freelance website businses consultant.

Jesse Angelini, another MSMAP volunteer instructor, works at The Fifth Season in Mt. Shasta, where he is the manager

“I definitely like how taekwondo helped me because it gave me a lot of structure,” he said, adding that he likes bringing that to his students.

MSMAP continues to offer tools to achieve individual success through decades of experience, modern facility, and proven curriculum. To learn more, check out the following sections on how MSMAP makes this happen.