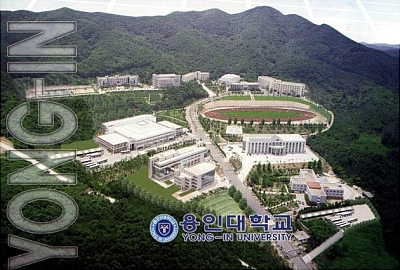 History.    Self-defense techniques (ho shin sul) were popular extracurricular activities at Yongin since its founding in 1953. In 1976, the Combat Sports Department was created and hankido (yongmudo), kumdo, and ssirum were subjects included in the curriculum.

Academic Departments.    Today, the martial arts degree programs are organized within 10 departments that specialize in academic coursework and physical training in a variety of subjects:

Yongmudo Department.    “The Department of Oriental Martial Arts is composed of fencing, dragon martial arts [yongmudo] and taekkyun. The fencing program has a world class-level of technique and the dragon martial arts informs the superiority of Korean dragons to the world. The taekkyun, as the only traditional martial arts that is designated an invisible cultural asset (No. 76), attempts to develop global martial arts. Those students who possess aptitude tests based on the specialized, systematic theory and practice as to become specialized instructors.”
Source: http://int.yongin.ac.kr/eng/academics/ma04_oma.htm

Faculty.    It is not uncommon for the Judo faculty to include three or more former Olympic gold medalists. Former world champions are on staff in the other martial disciplines. Most of the coaches and lecturers are former national team members and international medalists, ensuring that the level of all training and instruction is state-of-the-art.

Facilities & Location.    There are more than ten dojangs, or, gymnasiums, spread across the campus providing excellent facilities for specialized training. With its peaceful mountain setting on Pua Mountain near the city of Yongin (approximately 30 miles south of Seoul), the campus offers an ideal natural environment.

The 2002 Yongin program guide defines the purpose for including martial disciplines as academic and athletic pursuits:

The Department of Eastern Martial Arts was founded to maintain a new literary system proving the cultural value and scientific characteristics of the martial arts after making a comparative study of traditional fighting and to contribute to the development of the field of fighting. (Yongin Handbook, p. 9)

President Jung-Haeng Kim, Ph.D. views the university’s mission as assisting “its students in harmonizing knowledge and wisdom while fostering intellectual and social growth and preparing them for their future.” Yongin “brings forth the best traditions that will open the new millenium.”

Here are some interesting videos and articles to satisfy your curiosity.

Yong In College of Martial Arts

This is the official Yong In University web site (in English) and provides overviews of the four degree-granting martial arts programs.
http://www.yongin.ac.kr/yihome/eng/academic/ma.html

Judokas ready to compete for Olympic gold
Korea.net  |  April 25, 2012
Since Kim Eui-tae took the bronze medal in the men’s 80- kilogram middleweight division in the 1964 Tokyo Olympics, Korea has clinched nine gold, 14 silver, and 14 bronze medals, ranking third in the overall Olympic medal standings. This article describes how Korea qualified for all seven male weight divisions and ranked third in the world standings behind Japan and France prior to the 2012 London Olympics.