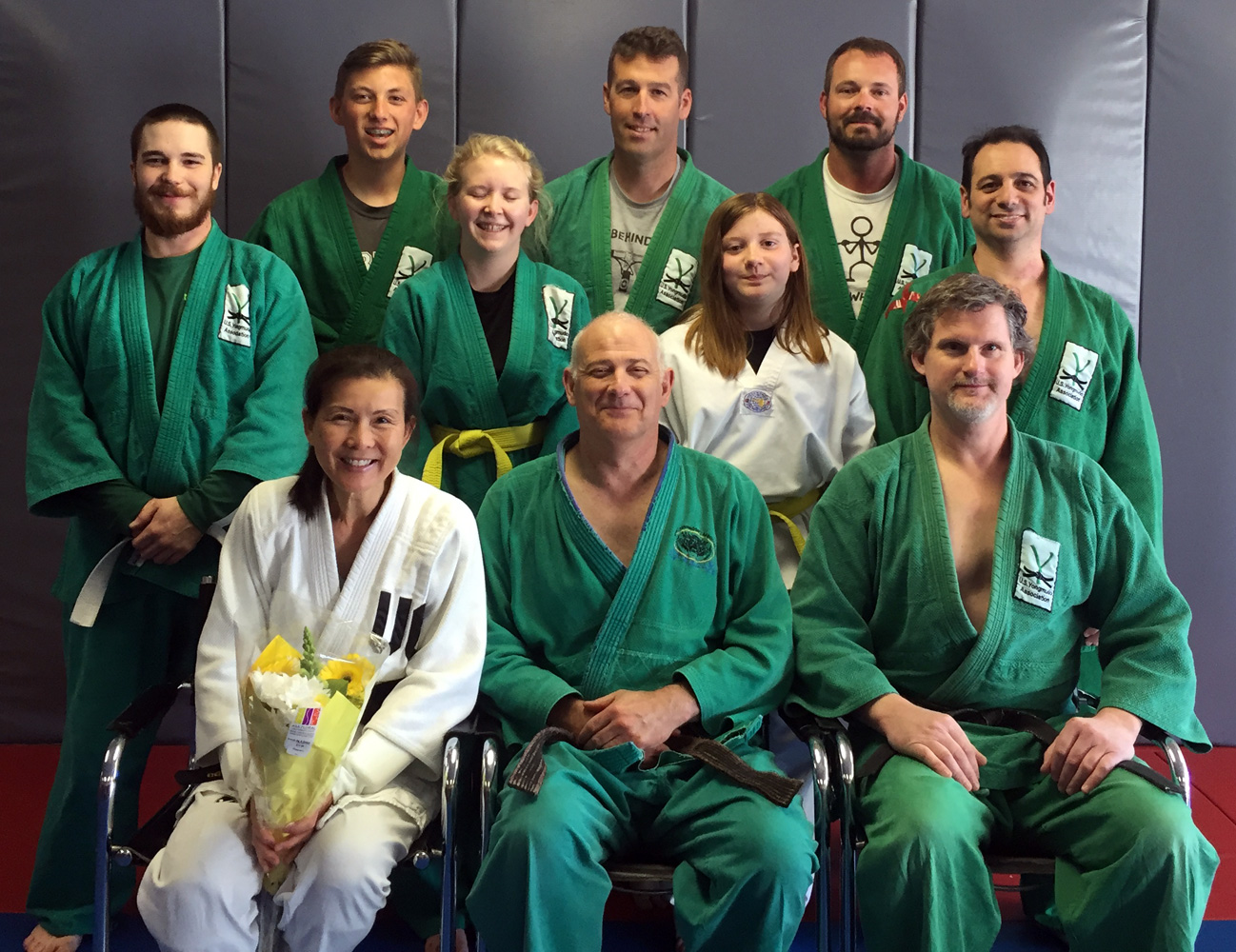 MSMAP Executive Director and Head Instructor Chuck Buhs called it “a great honor for us to have Dr. Norman Link and his wife, Dr. Susan Link, visit our community and spend time in our studio.”

Dr. Norman Link is a 7th degree black belt, the head instructor of the Cal Yongmudo/Self-Defense Club, and the Associate Director of the martial arts program at Cal. Dr. Susan Link is one of the senior yongmudo instructors at Cal and a successful California-state taekwondo competitor.

Seven people, ages 11 to 40, participated in both the workshop and exam.

Nova Tynsky, 11, who was promoted to yellow belt, said that she “liked the Links a lot, especially Susan.”

“This was a wonderful experience as Dr. Norman Link’s insight and understanding of the art really came through,” added Frank Cortese who was promoted to green belt. “I learned a lot of new techniques and history.”

The Art of Cheating

Buhs reported that “yongmudo is a martial art developed at Yongin University in Korea as part of a specialized academic degree program. The Yongin faculty wanted a comprehensive curriculum for self-defense emphasizing several skills including kicks, strikes, throws, wrestling, joint-locks, and pressure points. But, it's not just about the techniques; it’s also about taking a long-view of training. The idea is to continue training well into middle age — and beyond.”

“An important part of martial arts is health management,” explained Norman Link. “Experiencing a variety of bumps, bruises, and assorted minor injuries is expected, so proper care of these aches and pains is essential for productive, continuous training. This balancing act between a desire to get better and the need to heal becomes a bit more challenging with age.”

“This emphasis was reflected in the exam,” added Buhs. “The Links were looking for effective techniques tempered with care for each other. In other words, we wanted to see the techniques work without anything or anyone getting broken.”

For Cortese, 36, this fits perfectly with his fitness and training goals.

“I began after enrolling my 5-year-old daughter in taekwondo in January,” said Cortese. “As one of the only forms of martial arts in the area, my curiosity about yongmudo got the better of me. It’s appealing because it's not about beating anyone up. I get to have fun with a lot of cool people and can really push myself physically.”

“I find that this style is very nonrestrictive,” he continued. “It doesn’t seem to be bogged down in tradition and specific form like other martial arts I’ve studied. At times, I miss the structure, but as I learn more, I am beginning to appreciate yongmudo for what it is.”

As for what yongmudo is, Link highlighted the “anything goes” aspect, describing it simply as “the art of cheating.”

He explained that “yongmudo as a self-defense art generally assumes that in the case of an attack, a smaller person is being set upon by a larger, stronger person. To successfully escape, one needs to be willing and able to do things that are not generally considered to be taught in a politically correct class such as distractions based on acting strange, attacking fingers and toes as they are weaker, and other strategies like this. Yes, kicking someone in the groin would work, but the males of the species are remarkably adept at avoiding this counter-attack. Self-defense is not about fighting by ‘the rules’; this is a myth. Run, escape, cheat.”

Self-defense is not about fighting ‘by the rules’; this is a myth. Run, escape, cheat.

When asked about the perception that martial arts training encourages violence, Link responded that “Martial arts is not about violence; it is about training of the mind. The body just comes along for the ride.

“Martial arts ‘saves’ far more people from nasty falls than from attacks by others. I would contend that self-defense is really just ‘situational training’ — put the students in different, often strange, situations and have them think their way out of it.

“For example, if you are on your back on the ground and a person twice your weight is sitting on you then you should not waste your time on trying useless, ineffective counters, you need to think and act. The person who freaks out — or worse, freezes — usually sustains worse trauma than one who can react in a more reasoned fashion.

Link emphasized that the mind is crucial to lifelong training.

“I am slowly but steadily losing my battle with father time,” he said. “My body keeps changing and I can either give up or re-train my body to adapt to its new vessel. I choose the latter. It is a constantly changing set of equations, and I have to re-train my thinking as I get older.

“When I lived in Japan I would go to martial arts workouts and work with people in their 80's and 90's. I may be — for the time being — stronger than them physically but the fact that they are out there still pushing along is something I greatly admire. I remember a guy who celebrated his 92nd birthday at a Kendo/Iaido workout. When he was asked why he was there on his birthday, he said, ‘I am here because this training is the greatest gift I can give myself.’ I agree. There is rarely a workout where I have not been given a juicy little nugget of technique or experience that I cannot treasure.

“People ask as I advance in rank whether I will quit when I can no longer learn things — that assumes, fallaciously, that I know it all. Bull-twaddle! Only ignorant people know everything. For the rest, there are many lifetimes of information to be learned, and I am already behind in my learning.”

Ah, to train in the shadow of Shasta is the greatest of gifts.

In addition to training at the MSMAP studio, Buhs took the Links on a hike through the snow up to Heart Lake. The last time Norman Link was in Shasta was for the 31st International Korean Martial Arts Summer Camp held at McCloud High School in 2006.

“Ah, to train in the shadow of Shasta is the greatest of gifts,” shared Link. “It is not practical to practice outdoors all the time as safety and efficiency preclude it, but to have those great treats of occasional outdoor workouts — or hiking up a snowclad mountain — is a gift one cannot take lightly and should participate in when the opportunity is given.”

MSMAP’s goal, according to Buhs, “is to provide a broad and informative martial arts education to our community,” continued Buhs. Dr. Link not only brings an eclectic martial arts background with his instruction, but he also offers a scientist’s curiosity to explain why techniques work or don’t work.”